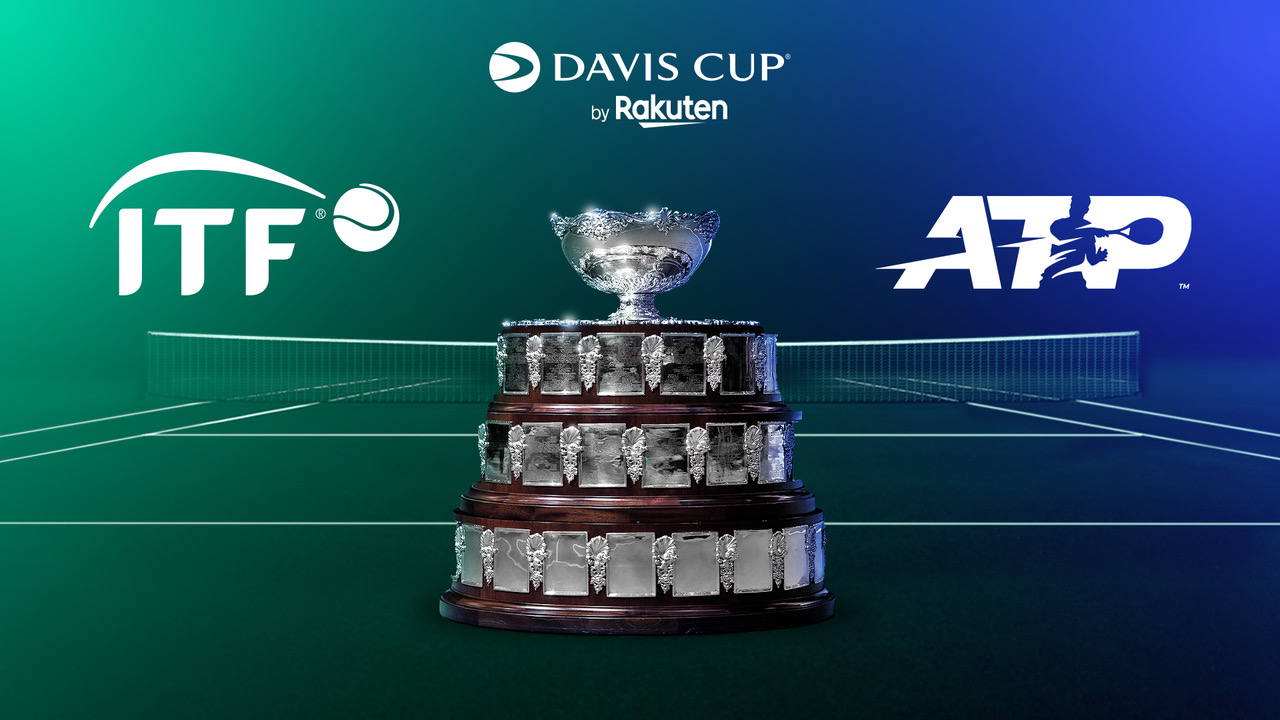 ATP, ITF and Kosmos announce Davis Cup partnership
The ATP, International Tennis Federation (ITF) and Kosmos Tennis have today announced an unprecedented strategic alliance from 2023 supporting the Davis Cup by Rakuten. The men’s World Cup of Tennis is the longest-running and largest annual international team event in sport with 122 years of history.

The new partnership has been established to enable strategic collaboration on the competition’s governance and evolution, with ATP granted two of six seats on a newly formed Davis Cup Event Committee alongside the ITF and Kosmos, long-term investors and promoters of the competition. The partnership officially brings ATP and ITF together across Davis Cup for the first time in history in a combined effort to maximise the success of the historic team competition as the men’s World Cup of Tennis.

The Davis Cup Finals and Qualifier ties now become an official part of the 2023 ATP Tour calendar, taking place in weeks 5, 37 and 47, with increased promotion on ATP channels. This integration will support players in planning their annual schedule when selected to play in their national Davis Cup team. The Finals will continue under its existing format, offering $15 million in player prize money in 2023.

Andrea Gaudenzi, ATP Chairman: “Our focus is always on creating the best possible experiences for our fans and players. Delivering compelling international team competitions that dovetail with the year-round calendar and continue to innovate is a vital part of that. The Davis Cup has an incredibly rich history and we’re excited to see this important new alliance drive the event forward from 2023.”

David Haggerty, ITF President: “This announcement heralds an important new alliance between the ITF, Kosmos and ATP which further strengthens the importance of team competition and Davis Cup’s unique role in elite men's professional tennis. Part of the Olympic Qualification Pathway, Davis Cup is the largest annual men's team competition in sport and the sole men's team competition in the pro tennis calendar where teams are officially selected by their nation. Together with the women’s Billie Jean King Cup, it shows the ITF’s full commitment to delivering spectacular tournaments that players love to play and electrifying battles between nations which fans in the stadium and whole countries love to get behind.”

Enric Rojas, Kosmos Tennis CEO: “It is a very important agreement for all three parties and especially for the players. In the last three years, the format of the competition has been improved to reach a greater number of fans, generate a greater impact and facilitate the participation of the best players in the world. We look forward to seeing the event grow even further in the coming years.”

Davis Cup recorded its highest levels of national participation in its history in 2022, with 137 nations competing in this year’s edition across all levels of the competition. The ITF’s Davis Cup runs alongside its sibling, the women’s World Cup of Tennis, Billie Jean King Cup by Gainbridge.

Further information about the 2022 Davis Cup by Rakuten Finals can be found at daviscupfinals.com

As a global governing body of men’s professional tennis, the ATP’s mission is to serve tennis. We entertain a billion global fans, showcase the world’s greatest players at the most prestigious tournaments, and inspire the next generation of fans and players. From Australia to Europe, the Americas and Asia, the stars of the game battle for titles and Pepperstone ATP Rankings points at ATP Masters 1000, 500 and 250 events, and Grand Slams. All roads lead towards the Nitto ATP Finals, the prestigious season finale held in Turin, Italy. Featuring only the world’s top 8 qualified singles players and doubles teams, the tournament also sees the official crowning of the year-end ATP World No. 1, presented by Pepperstone, the ultimate achievement in tennis. For more information, please visit www.atptour.com

The International Tennis Federation (ITF) was founded in 1913 as the world governing body of tennis to ensure the long-term growth and sustainability of the sport. The ITF works to deliver tennis for future generations in association with 213 National Association members. The ITF is custodian of the rules and regulations that govern international and national competition. It is responsible for the worldwide development of tennis in all four corners of the globe, the science and technology behind the game and education and advancement of coaches and officials. The ITF is responsible for the ITF World Tennis Tour, the international pro tennis pathway from juniors to the highest levels of the game with 1,000+ tournaments for men and women. The ITF is the main provider of international team competition, with the largest annual competitions in sports, the women’s and men’s World Cup of Tennis, Billie Jean King Cup and Davis Cup. The ITF also oversees Wheelchair Tennis team and individual competition, as well as Beach Tennis, the ITF Juniors circuit and the ITF World Tennis Masters Tour for players aged 30 to 90+. For more information, please visit www.itftennis.com

Founded and chaired by professional football player Gerard Piqué, and backed by Hiroshi Mikitani, the Chairman and CEO of Rakuten, Kosmos was born in 2017 with the aim to transform the Sports & Entertainment industry through innovative investments and trustable partnerships. Kosmos is building a global portfolio of sports, media and entertainment assets, leveraging strategic synergies across forms of content, platforms, technologies and geographies. Kosmos has already launched several verticals to develop unique opportunities in the sports world over the last years: Kosmos Tennis, Kosmos Management, Kosmos Football, Kosmos Studios and Kosmos Media. Kosmos Tennis is a subsidiary of Kosmos focused on the development and organisation of global tennis events. In 2018, they signed a 25-year agreement with the International Tennis Federation to organise and develop the Davis Cup, the world's largest international tennis competition born in 1900. The agreement between Kosmos and the ITF brought about a change in the format of the competition with the aim of becoming the 'World Cup' of tennis, reaching a larger number of fans and being more attractive to brands. Currently, the competition has a group stage in four different venues with the 16 best countries in the world, and a final stage with the best eight. The aim of the teams and players is to lift the trophy in November.